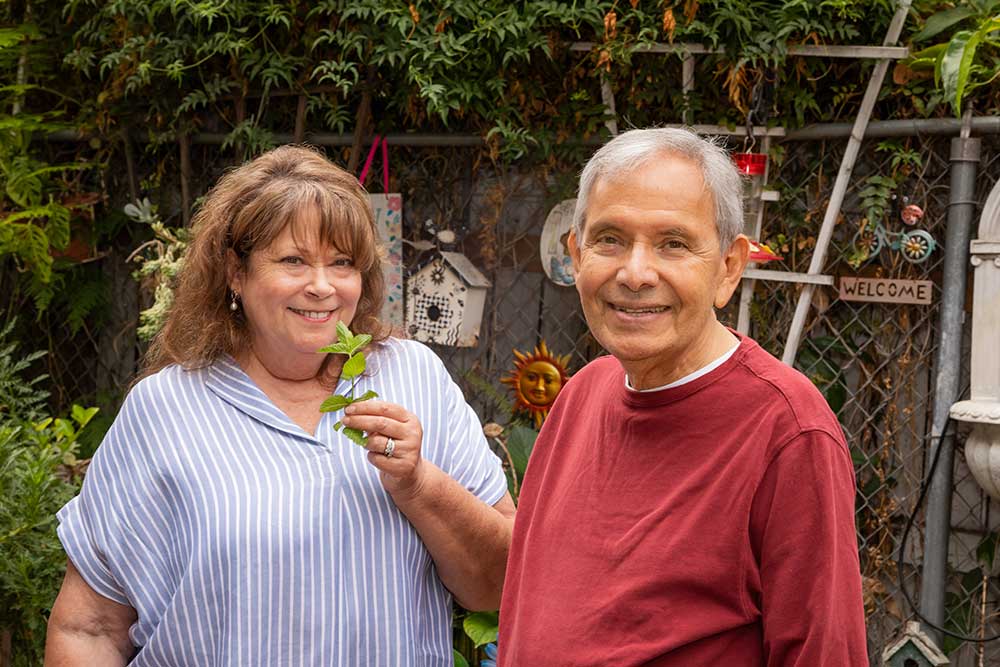 By donating a part of her liver, one woman gave someone else the gift of better health. Both transplant participants are still thriving after two decades.

When Walter Cervantes learned he needed a new liver in 2002, the last person he wanted to ask was his close friend Rosie Lewis.

Back then, living liver donation — in which a healthy person gives a portion of their liver to a patient in need — was a new concept.

Cervantes knew the procedure would be hard on Lewis, a close friend who worked with him as a fellow flight attendant.

“Rosie was one of my favorite flying partners,” Cervantes says. “I loved her sense of humor, her warmth and her kindness toward the passengers.”

Lewis regularly drove Cervantes to and from the airport and had bonded with his family — his wife, Elenda; their daughter, Jacqueline; and two older boys, John and Daniel, who both live with autism.

Cervantes, then 54, knew that Lewis would offer to donate if she learned of his illness. And, when she eventually did, she refused to take no for an answer.

This year, they celebrated the procedure’s 20th anniversary.

Months for a living donor’s liver to fully regrow

During a flight in 1999, Cervantes was hit by debilitating abdominal pain. He was sent to a hospital after landing in Guatemala. The diagnosis was hepatitis C, which was rarely treatable.

Although Cervantes was seriously ill, he was unlikely to receive a deceased-donor liver transplant due to national criteria used to prioritize patients in the United States.

His USC care team, which included Robert Selby, MD and Linda Sher, MD, recommended a living donor transplant. They told him that the liver, the only organ that regenerates, can grow back to normal size a few months after donation.

In 1999, there were 14,709 patients in the United States waiting for a liver transplant. Only 4,527 cadaveric livers were available, which meant thousands of patients died waiting.

But toward the end of the 1990s, a few research hospitals began offering a novel option: transplantation from living donors.

“Keck Medical Center of USC was one of the pioneers of living-donor liver transplant, performing its first procedure in May 1999,” says Yuri Genyk, MD, co-director of Keck Medicine’s USC Transplant Institute and a member of Cervantes’ care team.

Patients who receive organs from living donors experience important postsurgical benefits, such as immediate organ function, decreased risk of rejection and increased longevity of the organ.

Of the 5,999 lives saved by liver transplant from January through August 2022, only 381 donations came from living individuals. Southern California suffers from one of the largest organ shortages in the country, according to Hyosun (Helen) Han, MD, medical director of Keck Medicine’s Living Donor Program. This is why Keck Medicine offers programs to educate and prepare would-be donors.

After Cervantes learned he’d need to find a living donor, he spoke to his colleagues to get the word out.

It didn’t take long for the news to reach Lewis. As expected, she brought it up to Cervantes on a ride home and offered to donate. Cervantes told her no, but she persisted, until he agreed.

When the day of the surgery came in March 2002, Lewis, then 46, went in on blind faith and a sense of adventure. The procedure took a tremendous toll on her body, and she required rest and help from loved ones before returning to work five months later.

Her selflessness moved Cervantes beyond words.

“There are no words to convey all the gratitude I feel for Rosie,” Cervantes says. “Without her, I would not be here.”

Our [living-donor liver transplant] program is one of the largest and most successful programs in the U.S. — as well as the only program in Southern California offering liver recipients this lifesaving option.

Life with a new liver

His posttransplant doctor, Jeffrey Kahn, MD, monitored him with regular blood tests and liver biopsies. Eventually, the care team confirmed that Cervantes’ liver health was excellent, and it has remained so for many years.

Seven years ago, Kahn — who is also medical director of the USC Liver Transplant Program at Keck Medicine — prescribed a new drug to fight hepatitis C. The drug eradicated the virus and cured Cervantes of hepatitis C, protecting his liver from future damage.

While newer resources are available to help transplant participants recover, Cervantes never recovered his former energy and had to retire from the airline industry. But he soon began volunteering at the South Pasadena Senior Center, which led to a role on the city’s senior commission and a job in public safety.

The innovations that aided Cervantes’ recovery were only part of the evolution of living liver transplants co-led by Keck Medicine.

“Our program is one of the largest and most successful programs in the U.S. — as well as the only program in Southern California offering liver recipients this lifesaving option,” Genyk says.

A friendship for life

Cervantes and Lewis have considered each other family ever since the procedure. She even got married at his house. While the pandemic has prevented the friends from spending time together, they regularly talk on the phone.

Lewis considers her experience a spiritual one that has connected her to Cervantes in a profound way.

Connect With Our Team

Our USC Living-Donor Liver Program has been a pioneer for more than 20 years. Our mission is to help patients get off the wait list and make transplants available to more people.
Learn more

When Blindness Attacks: How Research and Cutting-Edge Clinical Techniques Saved...

Vanessa Ho was just beginning her Saturday morning when she suddenly felt intense pain and blurry vision in her right...
Read more

The Corneal Correction: How a Specialty Scleral Lens Restored a...

Three years ago, an outside clinic diagnosed Maria Contreras with keratoconus, a degenerative eye disease that causes thinning and bulging...
Read more

In the summer of 2016, Laura Priest’s busy life came to a halt, when a ruptured brain aneurysm landed her...
Read more

Dr. Yessaian is a gynecological oncologist at Keck Medicine of USC, who specializes in the surgical and medical treatment of...
Read more
navigate_before Previous navigate_next Next
calendar_todayRequest an Appointment phoneCall Us: (800) USC-CARE searchFind a Provider placeFind a Location